CTBA experts are available to provide insight, analysis, and data to the press on a wide range of public policy issues. In addition, CTBA disseminates new research and timely updates on policy developments to the media.

Given both the size and cause of the state's fiscal shortcomings, at this point in time the greatest good policymakers can deliver for the public is to raise taxes.

First, there's the sheer magnitude of the problem. At the end of FY2015 — the

Raising taxes key to getting Illinois’ finances in shape

Editor’s note: As part of the Sounding the Alarm series, the State Journal-Register’s editorial board invited five statewide organizations to write a guest view answering the following question: Given the state’s financial situation, what agenda would you set for the governor and General Assembly? This is the third of those five op-eds.

My sincere thanks to the Peoria Journal Star for the editorial series on the problems facing the state of Illinois. I appreciated the historical look at how we got here and how the lack of a budget has resulted in the crisis now before us. I find myself in agreement with what has been stated, as I will further explain:

The Chicago Housing Authority’s controversial proposal to limit the amount of time voucher holders can receive housing subsidies is expected to be rolled out later this year.

According to the CHA’s review of families who took part in the Family Self Sufficiency Program in 2013, 67 percent 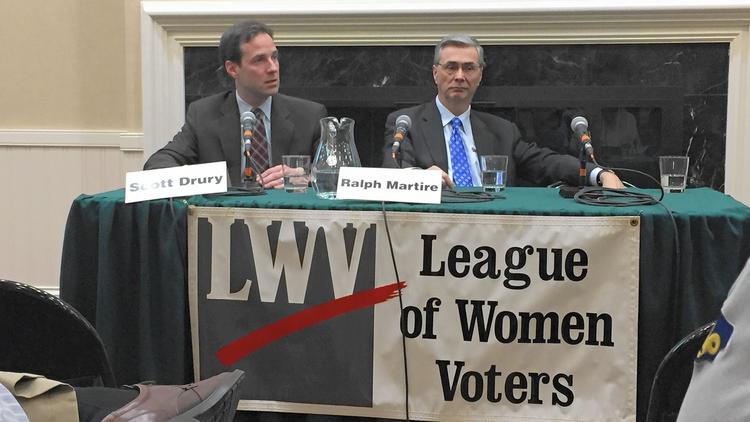 State Rep. Scott Drury, left, and Ralph Martire, right, of the Center for Tax and Budget Accountability spoke during a forum in Lake Forest on April 10. (Mark Lawton

Ken Davis is joined by Bobby Otter, Budget Director for the Center for Tax and Budget Accountability. They discuss the deeply troubling state of finances at

CHICAGO - A case scheduled to go before the Illinois Supreme Court this week is challenging the law that allows the state's not-for-profit hospitals to skip paying property taxes.

Last week, Gov. Bruce Rauner called for a meeting with the four legislative leaders to negotiate a General Fund budget for Illinois. Normally, that wouldn't generate headlines or news coverage.

Of course, nothing's normal when it comes to state budgetary matters, given that 18 months have transpired — including one full fiscal year — without a comprehensive General Fund budget having been passed by the General Assembly and signed by the governor.

Certainly, the governor and General Assembly should come together and enact a comprehensive General Fund budget. After all, doing so is the very essence of their responsibility to the public, given that more than 90 percent of General Fund spending on current services covers the four core areas of education, health care, human services and public safety. Oh, it also happens to be their constitutional obligation, so there's that. Moreover, based on what happened last year (fiscal year 2016), failing to enact a General Fund budget generates numerous consequences, none good.

That was the message delivered by Ralph Martire, an expert on school funding, at a forum sponsored by the League of Women Voters of Central Kane County on Oct. 20 at the Batavia Public

Voters on Tuesday approved an amendment to the Illinois Constitution requiring that gas taxes, license plate fees and other transportation-related revenue be spent only on transportation expenses.

The amendment, which creates a so-called “lockbox” for transportation funds, had broad