The Chicago Housing Authority has hoarded millions of dollars in a reserve fund and used federal taxpayer money for non-housing-related services, despite a waiting list of thousands of low-income residents, a new study says.

The report, released today by Chicago-based research group Center for Tax and Budget Accountability, found that from 2008 to 2012, the CHA handed out an average of 13,534 fewer vouchers each year than it was able to, according to the study. (See graph) 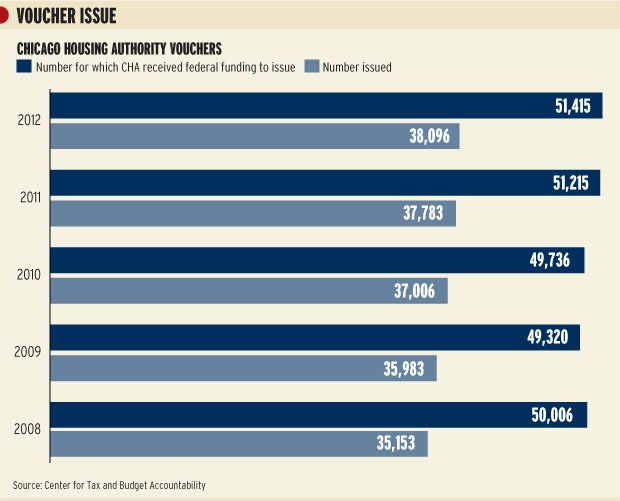 The center also found the CHA had used a portion of the money for educational and workforce-related services. Both the reserves and the non-housing spending were legal since the agency participates in the “Moving to Work” federal program, which allows the agency to divert federal funding into other uses.

Earlier this week, the CHA was under scrutiny for the opposite reason — using federal tax dollars to pick up most of the tab for low-income residents to live in luxury buildings.

In a Crain's report this week, the CHA was criticized by officials for issuing "supervouchers" for some of Chicago's priciest high-rises. So far, 706 of them have been approved, with some subsidizing rents as high as $3,000 a month.

The program's critics include U.S. Rep. Aaron Schock of Peoria, who wrote a letter to the inspector general of the U.S. Department of Housing and Urban Development asking him to investigate the program and how it selects recipients.

At a news conference this morning, Ald. Ray Suarez, 31st, chair of the City Council Committee on Housing and Real Estate, said none of the council members was aware of the CHA's reserves. The conference was hosted by the Center for Tax and Budget Accountability and the Chicago Housing Initiative, the housing advocacy group that commissioned the study.

Officials there announced that a team of six aldermen, led by Ald. Walter Burnett, 27th, will introduce an ordinance asking for more City Council oversight over the CHA. And this year, 3,000 residents who had been on the CHA's waiting list since 2008 will receive almost fully subsidized private housing.

That news was announced in May behind closed doors to Leah Levinger, the director of the Housing Initiative, and was confirmed today in the Chicago Tribune.

“What the CHA said today in the Tribune is very reassuring for us, but there's no way to ensure this isn't just a one-time decision to quell the masses,” Ms. Levinger said.

She added that the Housing Initiative has been meeting with CHA about budgetary and housing issues for several years. When she started noticing “visible dysfunctions in vacancies of public housing and in their financial reports” she realized these signs were just the tip of the iceberg and commissioned the center to conduct the study.

Bobby Otter, one of the co-authors and principal researchers of the study, said it took six months to dig through and analyze the CHA's multiple and complex financial documents. What initially started as a budget overview quickly changed into a fiscal review of what the CHA was up to.

“Hopefully this study will get the CHA to provide more transparency of what they're doing and why. Having to review four different budget documents for just one agency was difficult to say the least for us,” Mr. Otter said.

“I hope this study inspires the mayor's office to take leadership and get behind the ordinance,” Ms. Levinger said. “This has to be structural reform, not just discretionary, only when people are watching.”

"CHA has the flexibility to use financial resources for vouchers or for other housing activities, such as development and capital projects," he said. "I am aware that there is a need for immediate housing assistance that vouchers can provide, so I made a commitment to ensure that CHA fulfills its obligation. . . .Of course, we will continue to forge ahead with our development plans; however, due to the great housing needs that exist, right here, today, I have elected to make more vouchers immediately available."